FACES OF UCCS: Gwendolyn Swift, Behind the Scenes

FACES OF UCCS: Gwendolyn Swift, Behind the Scenes 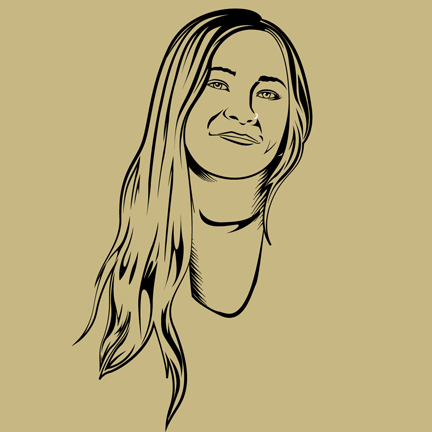 “I’ve always wanted to work in a museum, but this job has helped me discover where I’d best fit in in that environment.”

Commuting 45 minutes to upwards of an hour every day to UCCS from Woodland Park, CO, Gwendolyn Swift isn’t your average student.

As the external relations assistant for UCCS Presents, Gwendolyn manages social media, creates print programs for shows, researches artists and write bios for them, communicates with major donors and publishers, and much more. If you’ve ever been to a show by UCCS Presents, chances are the program you held in your hands was made by Gwendolyn.

“I originally started out as an intern at GOCA under Daisy McGowan, but UCCS Presents scooped me up quickly after that was over and I’ve been working here ever since.” 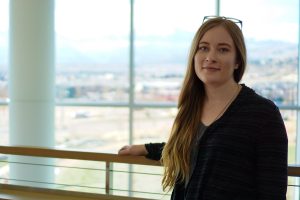 “Working in a museum is a very hard field to get into. People romanticize being a curator, but just seeing GOCA here at UCCS, it’s obvious that you need to be an extrovert. I’m very much an introvert, so my position in UCCS Presents helped me realize where my strengths in the industry are.”

Gwendolyn finds herself most comfortable behind the scenes and would like to work in the back of museums in collections or archives doing things like research, academia, material heritage, and archaeology.

When thinking of art hubs in the U.S., cities like New York and Chicago come to mind, but Gwendolyn is dedicated to staying in Colorado. As a Woodland Park native, Gwendolyn has witnessed firsthand the growth of Colorado Springs from her cozy town in the mountains.

“Typically, major growth in a city means a boom in the art scene comes with it, which is sort of what we’re seeing at UCCS. Our arts programming is becoming more relevant and adapting with the times.”

Gwendolyn’s right. With the recent construction of the Ent Center for the Arts a little over a year ago, we’re seeing the arts take a front-and-center stand on one of the busiest roads in the city. Gwendolyn asserts that movements in music, theater, and arts coincide, and her studies, combined with her job in the arts during this pivotal time, have helped to demonstrate that to her. 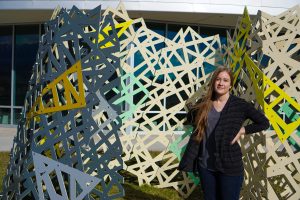 When she’s not at work promoting someone else’s art, Gwendolyn enjoys creating herself. A classically-trained violinist, she also enjoys drawing with colored pencils, pens, and graphite to create photorealistic and geometrical pieces. And when she’s not doing anything arts-related at all, she loves exploring the woodlands around her, trekking exclusively off of the beaten path.

Gwendolyn graduated in December 2018. Faces of UCCS is a series by Auxiliary Services Marketing highlighting outstanding student employees in the various Auxiliary Services departments. If you have a student you would like to nominate to be featured, email Jacob Guilez at [email protected]